Celebrating ten years since the release of its sophomore album, Scranton's very own indie rock duo Tigers Jaw comes to Pavilion at Montage Mountain on Friday 19th October 2018! The show promises to be an exciting and heartfelt trip down memory lane for fans and band alike, as their recent Facebook post suggests:

“Ten short years ago, we released our self-titled album. Recorded on nights and weekends at JL Studios in Wyoming PA during our high school years, it was our first time setting foot in a studio. The raw energy and youthful intuition (or lack thereof!) of those songs are the monument of a really special and formative time for us. There were no rules, no preconceived notions of how anything should sound, nothing more complicated than some friends making music together because it was fun.

Lucky for us, it’s still fun, and fulfilling, and amazing that we get to travel and make music. After all these years, these songs still resonate strongly with us and with so many others, so we have decided to honor it with an anniversary tour.

We will play a set of various songs from other albums, and then finish the set by playing the self-titled album, sequentially in its entirety. Joining us on this tour are some bands/friends that have been in our lives dating back to the time when this album was released….” 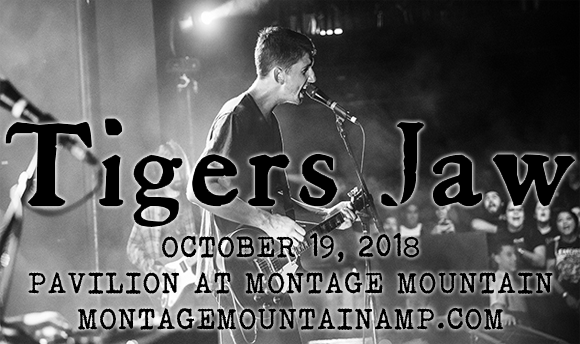 Formed in 2005 in Scranton, Pennsylvania, American indie rock band Tigers Jaw has experienced a number of line-up changes since its conception thirteen years ago. Originally a pop-punk two-piece comprised of Adam McIlwee (guitar, vocals) and Ben Walsh (guitar, vocals), in its first year the duo became a full band also consisting of bassist Dennis Mishko and drummer Mike May (who was later replaced by drummer Pat Brier) and keyboard player Brianna Collins. As a group, the band recorded its 2006 debut album, Belongs to the Dead, which was followed by a self-titled second album in 2008 and a third, Two Worlds, in 2010. In 2013, Tigers Jaw announced that Adam McIlwee, Dennis Mishko, and Pat Brier were leaving the lineup, and the band was going on hiatus. However, the band continued as a duo and in 2014 announced its fourth studio album, Charmer, which proved to be its most successful yet, reaching number 49 on the Billboard Charts. The band's most recent album, Spin, was released in May 2017.