It's time to grab that mini-backpack and don the hair mascara as I Love The 90s comes to Pavilion at Montage Mountain on Saturday 26th August 2017! With a stellar line-up that has all your 90s favorites including TLC, Coolio, Young MC, Rob Base & Tone Loc, tonight we're gonna party like it's 1999! 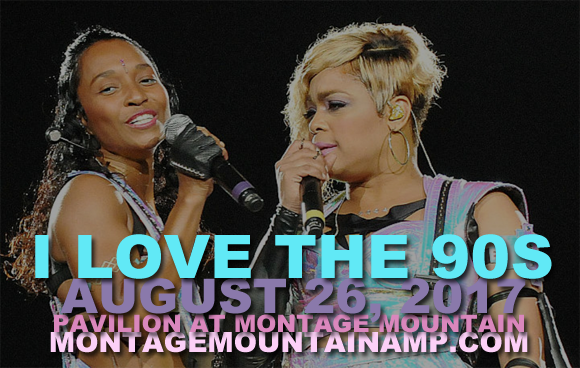 Formed of Tionne "T-Boz" Watkins, Lisa "Left Eye" Lopes (now deceased) and Rozonda "Chilli" Thomas, TLC is the best-selling American girl group of all time and the second biggest selling girl group worldwide (after English group the Spice Girls), having sold over 65 million records worldwide. Known for several hits throughout the late 1990s and early 2000s including nine top-ten hits on the Billboard Hot 100 and four number-one singles ("Creep", "Waterfalls", "No Scrubs", and "Unpretty"), TLC have also recorded four multi-platinum albums, including CrazySexyCool (1994) which still remains the only album by a female group to receive a diamond certification from the Recording Industry Association of America (RIAA). TLC have received numerous awards throughout their career, including four career Grammy Awards, five MTV Video Music Awards and five Soul Train Music Awards, and were honored with the Outstanding Contribution to Music at the 17th MOBO Awards and Legend Award at the 2013 MTV Video Music Awards Japan. When Lisa “Left Eye” Lopez died in 2002, the remaining members chose to carry on as a duo, and have recently announced that on June 30, 2017, they will release their final album as TLC, but they will not split up following the album's release and will continue to perform together.