Lovers of country, we are proud to present the 2017 Country Megaticket, your pass to the BEST country shows of the year – an exciting weekend of Dierks Bentley on June 10th and Froggy Fest, headlined by Lady Antebellum on July 9th, plus an extra cheeky day with Luke Bryan on September 6th!! One ticket, 3 phenomenal shows at the Toyota Pavilion at Montage Mountain!! These tickets are going to disappear FAST so do NOT delay in getting yours!! 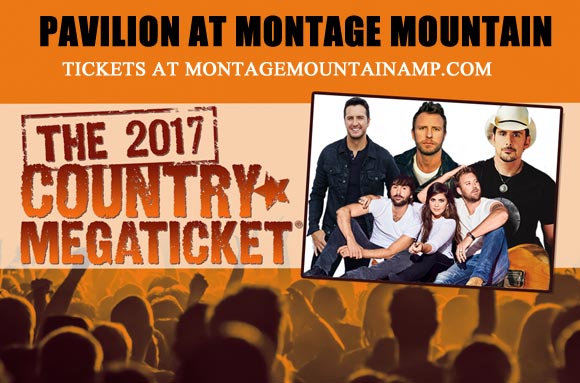 Dierks Bentley, our Saturday headliner, on tour with Cole Swindell and Jon Pardi, is promoting his latest, boundary-pushing release “Black.” A concept album dealing with the darker sides of a long-term relationship, Bentley is constantly surprising and delighting audiences and critics alike with his constant evolution as a musician and songwriter. “Black,” sold 88,0000 copies in its first week, and is Bentley's highest charting album to date!!

On the Sunday, 5-time Grammy-Award winners Lady Antebellum, with support from young Grammy nominee Kelsea Ballerini will give you a show like nothing you've ever seen before!! Their new single, “You Look Good,” is a teaser for their upcoming album in 2017, “Heart Break,” which they'll be performing live at the Froggy Fest – more acts to be announced!! Finally, on the 6th of September, Luke Bryan will take to the stage with phenomenal support from Brett Eldredge and Craig Campbell! The recipient of the Academy of Country Music Awards and Country Music Association Awards "Entertainer of the Year" award, Luke Bryan has sold in excess of 7 million albums and 27 million singles across the world!!

It's a pass to a series of epic shows that no self-respecting country fan would want to miss! What are you waiting for??? Get your Country Megaticket TODAY!!!